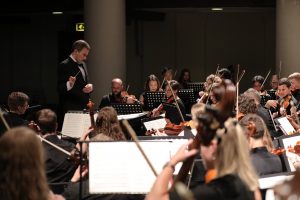 Leo was an Exhibitioner at the Guildhall School of Music and Drama (Department of Initial Studies) between 1994-99 where he specialised in piano, violin, viola, and began formal conducting studies. Under the guidance of his late mentor, Frederick Applewhite, Leo conducted all the major college symphony orchestras.

While still at school, and early in his career, Leo was soloist with orchestra in concert performances of Tchaikovsky Piano Concerto No. 1, the Grieg Piano Concerto, and the Bach D minor Piano Concerto.

Leo studied viola and conducting at Trinity College of Music, London, graduating with the Conducting Prize.

He made his professional conducting debut in 2000. In the same year he became one of the youngest conductors ever to be admitted to the Dartington International Summer School Advanced Conducting Course.

A Guest Conductor and Music Director throughout the 2000’s, Leo’s conducting has taken him to Finland and Greece.

Leo is the Founder and Artistic Director of the Amati Orchestra. 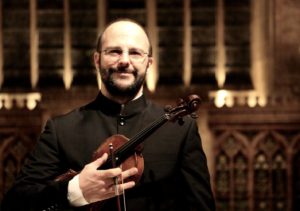 Edouard is a professional violinist and teacher based in London, and Leader of the Amati Orchestra, with whom he was soloist in the Bruch Violin Concerto No 1 in July 2016, and the Beethoven Violin Concerto in March 2015. Having started his musical journey as a chorister with the Metropolitan Cathedral Choir, he was inspired to play the violin at age 6 after hearing the Merseyside Youth Orchestra in Holst ‘The Planets’.

He entered Trinity College of Music London in 1989, completing graduate and postgraduate diplomas in violin performance under Hu Kun.

Edouard was awarded two scholarships to study chamber music with the world-renowned Brodsky and Smith quartet. As 1st Violin of the Marcucci String Quartet, Edouard toured Great Britain, Jersey and Northern France. He has also tutored and performed as a chamber music coach at the Dartington International Summer School and the Bath Guitar Festival.

Edouard has played with professional and amateur orchestras including the Young Musicians Symphony Orchestra, on tour with Sir Yehudi Menuhin, with the British Youth Opera Orchestra, Concilium, and on tour with Opera of the South.